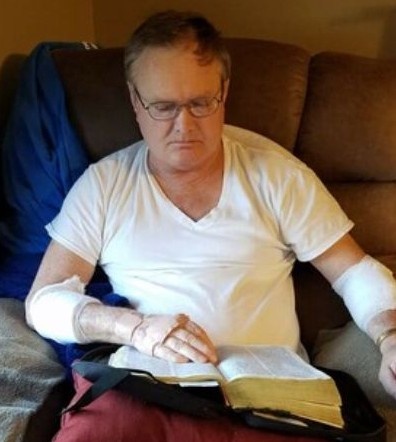 He was born in Whitfield County, November 1, 1952 a son of the late Arnum Lee Correll and Geraldine Baxter Correll. Also, he was preceded in death by a son, Jeff Correll who died October 27, 2015 and five brothers, Henry, Lester, Jesse, Homer, and Irvin. He was a member of the Canaanland Baptist Church and was an avid Bible reader. Prior to his retirement, Bobby worked as a truck driver for CTI.

Bobby was married to the love of his life, Vickie Bagley Correll for 48 years. They met on December 18, 1973 and he died December 18, 2021, 48 years later. He is also survived by a son Jason Correll and four grandchildren, Jimmy, Justin, Jesse, and Phoebe Correll, and his affectionate companion, “Itchy”; brother, Waymon Correll; and daughter-in-law, who he always called his girl, Tara Correll.

Funeral services will be conducted at 1:00 PM, Tuesday, December 21 at the Higher Praise Church of God with the Reverends Isaac Johns and Derrick Ingle officiating. Debbie Bagley and Jennifer Dunn will have charge of music, and the body will lie in state from 12 noon until the funeral hour. Burial will follow the service in the adjoining Sardis Cemetery. Pallbearers are Stan Fleming, David Correll, Eddie Tomlinson, Larry Wright, John Warren and Carl Laudermilk. The family will receive friends from 5:00 until 7:00 PM Monday at the funeral home.

Honorary escort will be members of the Classic American Rides Car Club. They are asked to meet at Thomas Funeral Home at 11:00 AM, Tuesday. They will lead the procession and hearse to the church for the ceremony at Higher Praise Church.

Thomas Funeral Home has charge of arrangements for the services of Bobby Lamar Correll.

To order memorial trees or send flowers to the family in memory of Bobby Lamar Correll, please visit our flower store.