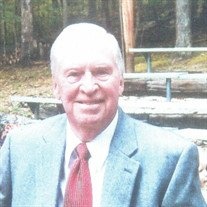 
Bill was born on January 24, 1932 in Johnson County, Kentucky, son of the late Clyde Cecil Williams and Ruth Ealey Williams. In addition to his parents, Bill was also preceded in death by his brother, George Rondall Williams and father-in-law and mother in law, Frank and Mary
Christian. He attended Baylor University and University of Houston. Bill served in the United States Air Force and was a veteran of the Korean Conflict. Prior to his retirement, he was Senior Vice President of General Reassurance Corporation. He was an avid golfer who prided himself in playing 147 different golf courses through the years, including 3 times at Pebble Beach Golf Course.

Funeral Services will be conducted on Tuesday, May 4, 2021 at 11 AM from the Chapel of Thomas Funeral Home with Dr. John Roy officiating. Interment will follow in Fain Cemetery.

Thomas Funeral Home has proudly been entrusted with the care of Cecil Martin”Bill” Williams.

To order memorial trees or send flowers to the family in memory of Cecil Martin Williams, please visit our flower store.
Send a Sympathy Card