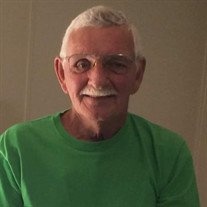 Glenn was born on July 31, 1950 in Murphy, North Carolina, son of the late Ralph Stiles and Ella Dockery Stiles. In addition to his parents, Glenn was also preceded in death by: a sister, Margaret Stiles Kidd; and brother, Robert Stiles. Glenn has been a resident of Gordon County, GA for the past 52 years and worked as a Supervisor for World Carpet.

The family will receive friends on Tuesday, May 4, 2021 from 5 PM until 7 PM at Thomas Funeral Home.

Funeral Services will be conducted on Wednesday, May 5, 2021 at 3 PM from the Chapel of Thomas Funeral Home with Reverend Eddis Dockery officiating. Interment will follow in Hall Memorial Baptist Church Cemetery.

Due to the ongoing national health crisis, face coverings must be properly worn by all those who plan to attend. Social distancing guidelines must be followed at all times while attending the service.

Thomas Funeral Home has proudly been entrusted with the care of Glenn Edward Stiles.

To order memorial trees or send flowers to the family in memory of Glenn Edward Stiles, please visit our flower store.
Send a Sympathy Card