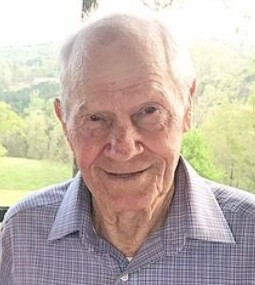 Pruney graduated from Calhoun High School and played for the 1952 State Championship Football team. He also graduated from Southern Poly Tech. Pruney served in the United States Army and was stationed in Germany. He later joined the local National Guard Unit HHC First Battalion 108 Armor GAANG. Prior to retirement he was self employed as a master plumber and electrician. He was owner of McEntyre Plumbing and Electricial.

Funeral Services will be conducted on Friday, February 25, 2022 at 4 PM at the Calhoun Church of Christ with Minister Frank Mills and Minister Zack Townsend officiating. Alan Holcomb will give the Eulogy. Interment will follow in Chandler Cemetery.

The family will receive friends on Thursday, February 24, 2022 from 4 – 7 PM at the Calhoun Church of Christ.

In addition to flowers donations in memory of Robert Wayne “Pruney” McEntyre Jr. may be made to the Calhoun Recreation Department or the Calhoun High School Athletics Department.

Thomas Funeral Home has proudly been entrusted with the care of Robert Wayne “Pruney” McEntyre Jr.